Located in the West Indies near Barbados, Bequia is a tiny, 7-square mile, volcanic-based oasis floating on a sea of cobalt, aquamarine, Copenhagen-and-all-manner-of blues and greens. With approximately 5,000 residents, Bequia is truly quite undiscovered- no cruise ships call and the somewhat arduous connections to get there dissuade casual vacationers or those looking for even 3 star accommodations. Yachties know it well but even so it is somewhat off the beaten cruising path, unlike, for instance, the Bahamas or the Virgins.

The island offers no hi-rise hotels, no resorts, just a few restaurants, 3 little stores, and very little shopping, primarily made of the same old T-shirts and mass-market crap in the few stores and sold by street vendors. 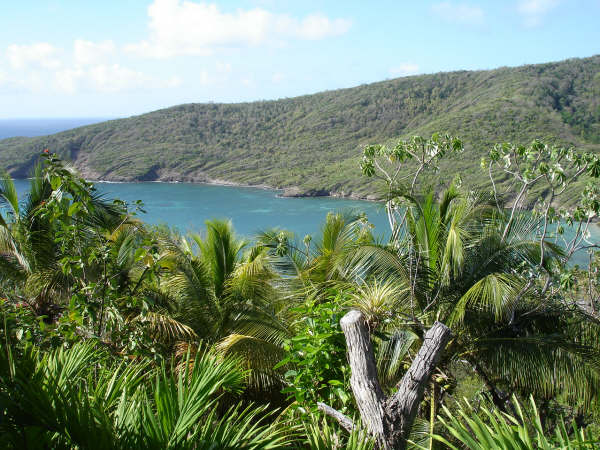 I liked the greenery of the volcanic hills, all the Bougainvillea, every kind of Bird of Paradise and all sorts of Hibiscus and of course orchids everywhere. The fragrances were heady. Not to mention the brightly-hued little Quits, a species found throughout the Caribbean and the ubiquitous ground Dove, a smaller bird than the Mourning Dove found in North America.

Our digs were simply sublime- a 3 bedroom, 2 bath home with plunge pool, situated on the crest of a hill, offering sweeping views of the coast and steady breezes. We rented a 4X4 drive jeep which was barely adequate to climb the steep, rough road to the house.

Steep trail to our villa. 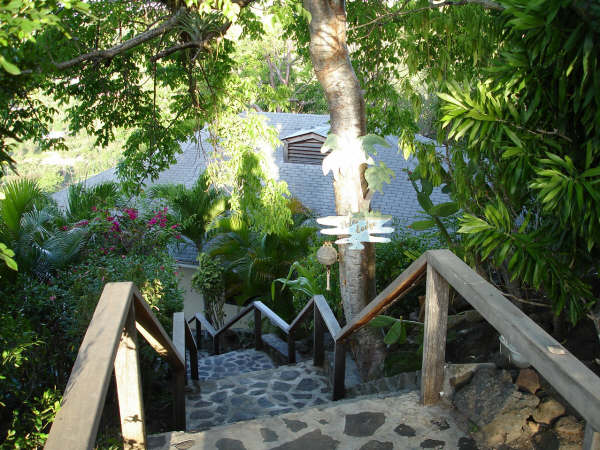 Our villa on the hill, Bequia.

Several mornings we sat out on the villa patio and watched a squadron of hummingbirds work over a large, flowering tree that hung out over the steep ravine below. Finches, and Magpie-like members of the Crow family called and chatted, flitting about from tree to tree all day. Two mornings we heard a throaty, raspy loud series of calls that sounded to my ear very parrot-like. I don’t know if the threatened Amazon Parrot found on nearby St. Vincent makes a home on Bequia, but I wouldn’t be a bit surprised, as the islands are a mere 9 miles apart. 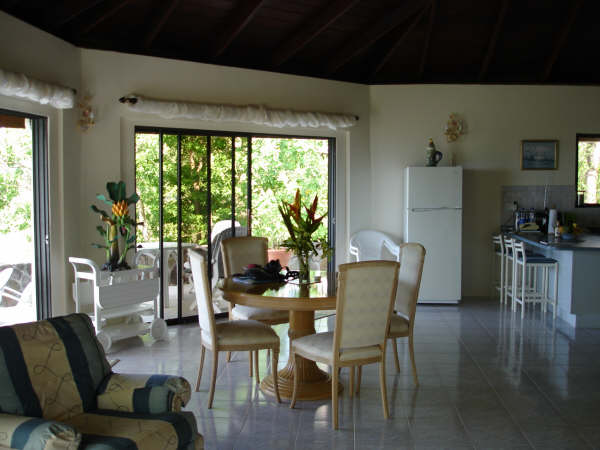 The other major boon of Bequia is all that fresh, salt-sea air, a balm to those of us who live in cities with poor air quality.

Robin chills at our fav beach at Lower Bay, Bequia.

Caribbean vacations are each different, in the context of the “sameness” of Caribbean travel- heat, inefficiencies, airport hassles, sullen locals, iffy and limited food selections, slow service, high prices for all goods brought to the island. But hey, one becomes more tolerant with age and experience, especially if assisted by a rum punch or two.

However, those rum punches nearly proved my undoing, as I tooled around in a right-drive Jeep on the left on extremely narrow, winding and steep “roads”, with no shoulders, just steep drop-offs on one side to the ocean and a concrete ditch between the pressing hillside and the narrow, switch-back roadway. The ditches were about 2 feet wide and 4 feet deep- just enough to capture your tire if you slipped into one, which I did when avoiding a cement truck that came whipping around a bend. I was careful to avoid snatching the tire back on the road (without power steering that was a trick!) and send us careening off the hillside. Such near-misses soon became routine and the subject of somewhat breathless giggling.

Water-borne activities included snorkeling from shore and from a dive boat. The latter trip to Shitten Bay (no kidding) featured a view of Moon Hole, an old, quirky stone home battered by too many hurricanes and abandoned in its crack in a volcanic hillside. 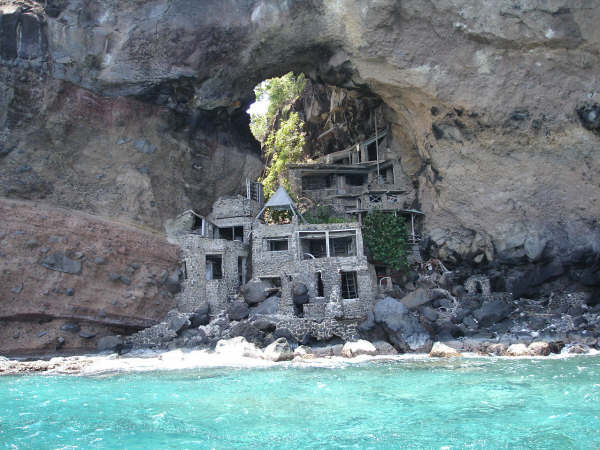 Near Moon Hole, we snorkeled Shitten Bay, which didn’t offer much in the way of reef structure or fishes. The divers on the trip saw more fish, but at depths beyond our reach.

Robin had a moment’s hesitation when we were sailing over to Isla a’ Quarte, a nearby undeveloped island. We were in 6-foot seas, fairly big in that small boat (32 feet) and it was quite windy so as we came up on the wind the boat heeled very steeply. Robin found herself on the lee side, sitting in cockpit facing to the stern with her elbow on the combing.  Her elbow got dipped in the ocean and she asked if the boat was gonna tip over.

Isle a’ Quarte beach, all to ourselves.

I laughed and Nikki, our skipper, was kind enuf to just grin. He was perched with one foot on the high side and another on the low side of the cockpit, his bare toes curled to grip the edges of the bench seat, looking very piratical. I braced my feet across from my seat to the edge of Robin’s and enjoyed the wind. This was Robin’s first sailing adventure, and she decided she likes it, even under very brisk conditions.

The stars were right down on our heads every night. Lotsa meteorites! We’d turn off the lights in the villa and that was a DARK night- no light looms from towns or cities, and headlights from a car traveling the shore road miles away lit up the night like a spotlight. A campfire on the beach over 2 miles away appeared as clear as a bell, and could see people moving in front of the light cast by the flames.

Bequia view to nearby islands. 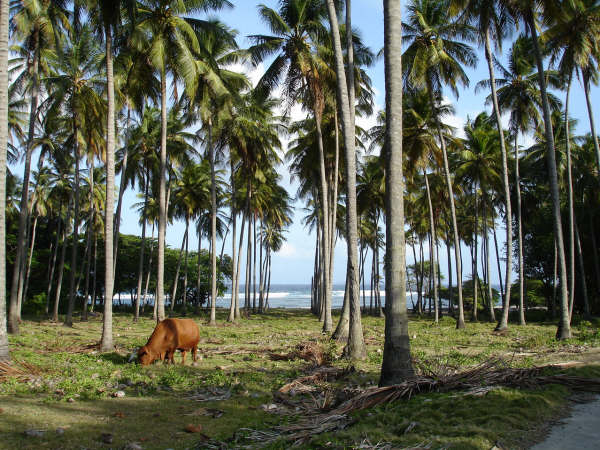 Scene at the base of our hill, Bequia.

One day we were hanging on the beach. I swam out to a patch reef offshore and in about 30 feet of water watched a large Spotted Eagle ray feed for 20 minutes. Its wing span equaled my own, its tail was like 3X the body length. Elegant and magnificent. It ignored me above and grazed the top of the flattish reef and nearby sand and grasses. Too weird- they have a pointed snout but when they feed they deploy these membrane-like flaps on either side of the mouth. The ray rooted in the sand or grass, digging up crustaceans no doubt and kicking up a cloud. Then it gulped once or twice, folded in the mouth flaps and swam to another likely patch and repeated the procedure. Way cool to watch.

The marketer in me wants to trumpet this not-so-discovered corner of the Caribbean to the world, but the weary, salary-slave-seeking-respite part says “Shhh! Keep it a secret!” 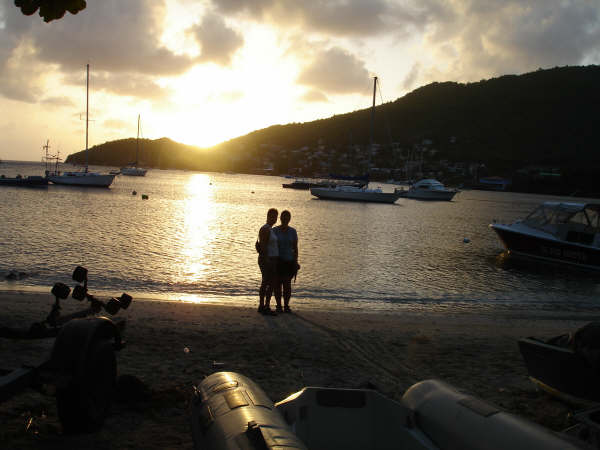 Lynn blends a love of independent adventure travel, history and the natural world with over 40 years of experience as an award-winning writer, photographer, creative designer, and producer. When not traveling, she serves as a consultant content strategist and digital marketer for U.S. Fortune 500 companies.

A Case of the Bends

Simply Messing About in Boats, Pt 1

This site uses Akismet to reduce spam. Learn how your comment data is processed.